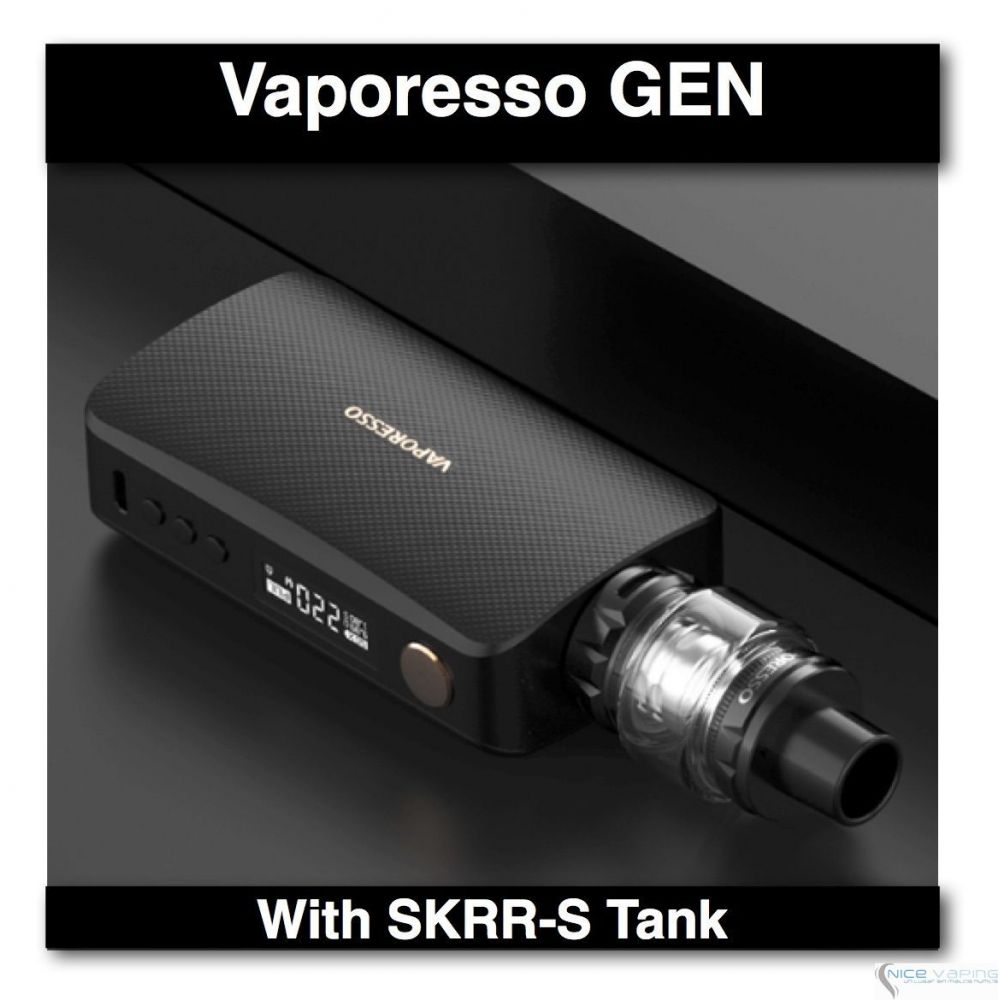 The Vaporesso GEN is the latest dual-18650 mod from popular vape manufacturer Vaporesso. The device is rated for 220 watts, comes equipped with the brand new Axon chip, and is designed to be lightweight and soft to the touch.

Vaporesso has established a tradition in making reliable and high-performing mods, like the Target Mini II (review coming soon), Luxe, Polar, and Armour Pro. They have quietly been one of the top mod makers in vaping for a while now. Can the GEN live up to the standards set by Vaporesso’s previous mods? Keep reading to find out.

When I first got this mod, I liked the design a lot. I know a lot of vapers have clamored for mods to go back to simple designs without looking like something out of a sci-fi movie, and Vaporesso delivers. The mod is basically rectangular, but still very comfy in the hands, and its edges are rounded off. It has a very soft feel to it as well. Their site claims that “the soft touch casing is made of 4 layers of coating, giving it a soft rubber-like feel, yet still making it smooth to the touch” and I have to say they aren’t lying there.

Only thing I didn’t personally care for was that they went back to a small 0.91-inch black and white screen. It makes it feel a little dated to me. I understand that the giant screen of the Luxe may have been a bit too much, but something similar to the screens of the Famovape Magma, Vandy’s Swell and Jackaroo, or the Geekvape Nova would have been nice.

The Vaporesso Gen is a nicely built and designed mod. While it is not as small as some of its competition, it comes at a good size and it is very lightweight at only around 107 grams—pretty much the same weight as the Vandy Vape Swell. The mod comes in four color options with the red and blue ones fading into black at the bottom. I have the silver one which looks pretty sleek and clean, but the “red to black fade” is my favorite. Branding is discreet with a small “Vaporesso” in the middle of one side, and a small “V” logo on the bottom center of the other. The centered 510 pin is great and can handle a 26 mm atomizer without overhang.

The battery door is a standard magnetic side plate. Batteries fit nicely and are easy to remove using the ribbon that’s attached to the plastic tray. The door has a coating on it with a warning about not using batteries with broken wraps; well done there, and I’m always happy to see safety being a priority. There is no button rattle, the battery door has no play and the magnets are strong. There is also a little notch on the bottom of the mod to help you remove it.

I would like to address a few things I have seen online about this mod. One user reported issues with the 510 becoming loose. I stress tested mine and had no issue at all. It seems to be isolated to a few defective early samples. The other reported issue was a discoloration on the top of the mod, which was claimed to be due to heat. I tested this as well and heat did not cause discoloration. I dug deeper to find the source of it and (oddly enough) it comes from e-juice. If you have a leaking tank, the outer soft material of the mod will absorb the juice and get stained. They should have put a clear coating to prevent that, but I can see it being an oversight as it’s not a thing that happens often. I will ding them for that though.

They list 2.5-amp charging on this mod and while I don’t recommend charging mods internally, I did test that just for informational purposes. I found the max charge rate to be 1.94-amps, so while it is a little overrated it does charge really fast, and most people don’t have a charger capable of over 2 amps anyway. But still, it’s always best practice to use an external charger

The Vaporesso GEN is packed with features and modes like most of their mods. You have Pulse Mode, Power Eco, Smart TC, a DIY Mode which is where you can pick the standard mode for Power (with normal, hard and soft preheats), Temp Control (SS, Ni200, Ti, and one memory slot), Voltage Mode, Watt Curve Mode, Bypass Mode, and Super Player Mode. In the settings menu, there is also their Smart and Auto Modes. The mod uses a standard TCR system, which is fully adjustable across all modes.

To sum it up, the GEN has pretty much every mode out there and then some, to the point where it’s overbearing. It’s cool to have the features, but everything you need is in the DIY mode menu and that’s where I stick around personally. Not sure what’s the point of having a Pulse mode, and Super Player is just Power mode with lower minimum resistance.

As far as the menu goes, it’s the typical Vaporesso menu with a dedicated mode button between the plus and minus. It’s very simple and easy to navigate. Here is a quick rundown:

Navigation is pretty straightforward and easy, especially if you have been using a Vaporesso mod in the past.

The GEN features their new Axon chip. Their older mods used the Omni chip which was one of the best chips in vaping, despite not getting the recognition it deserves, and much better than the more popular Gene chip of the Voopoo mods. Let’s see if the Axon can continue the tradition.

Testing on this mod was done with Sony VTC5A Batteries. They list the specs at 220 watts, but no volt or amp limit listed anywhere. I wish they listed all three on their site. During my testing, the max achieved wattage was 219, so their 220-watt rating is excellent. The amp limit I got was 44, which is above average for a dual-battery mod. The volt limit with a 0.67-ohm coil was 9.257, which is higher than most dual battery mods on the market and shows there is a boost circuit—that’s a nice plus, since most dual battery mods don’t have one. I’m glad they kept that in as it’s only been Vaporesso, Geekvape, Innokin, and Aspire doing that consistently on their chips over the past few years.

During my testing, the mod did a great job of not getting hot. It is also a pretty accurate mod, as you can see in the full test results above. It struggled a little with the 0.1-ohm build, but other than that, it performed great. I was also happy to see that they listened and removed the forced hard preheat.

The Gen has the full 220-watt limit available in TC. I was able to get a warm vape around the 420 F range, so it hits around 30 F higher—which is fine as you can adjust for taste with plenty of wiggle room. It throttles smoothly and has good dry hit protection. I get a consistent vape every time and the power lets you adjust the ramp up. It has no issues powering big builds either. Overall, and as I’ve come to expect from Vaporesso, it is a very good performer in TC mode.