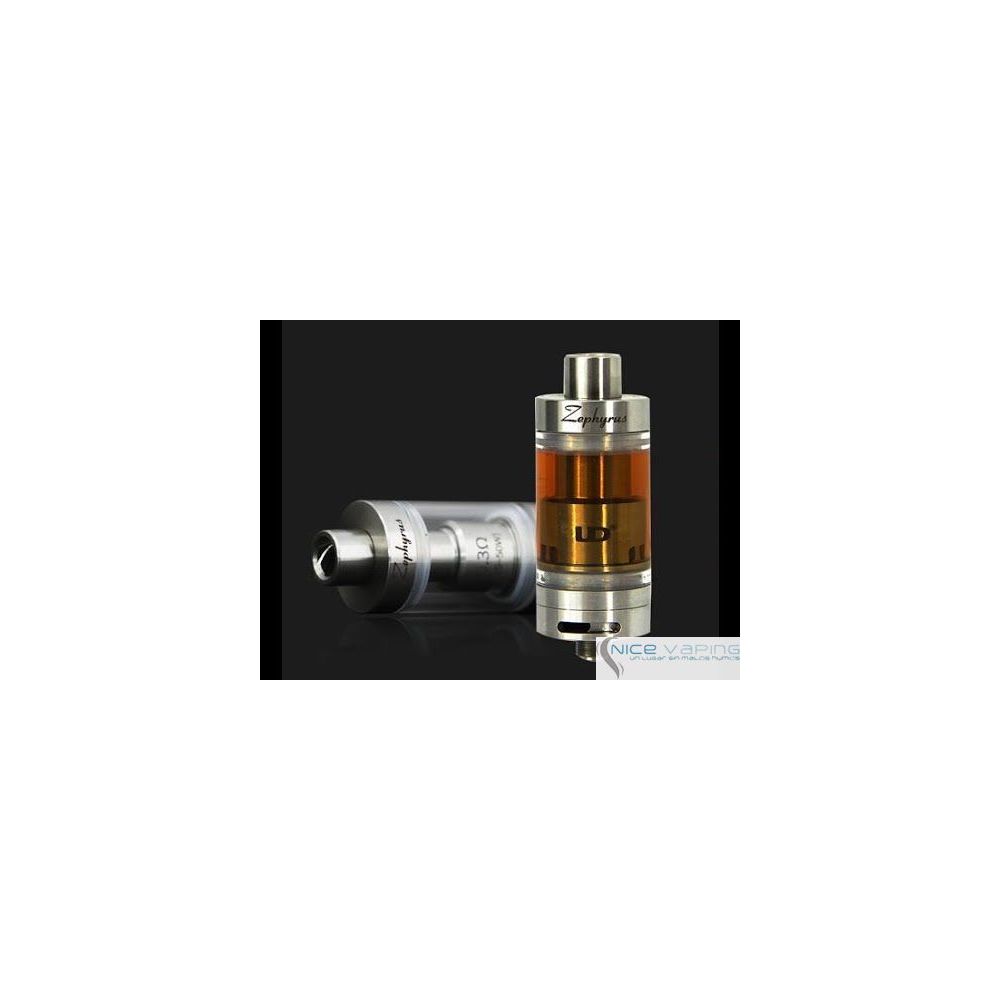 The Zephyrus sub-ohm vaping tank by UD is a truly high quality tank which looks to add a little extra to the sub-ohm craze. Featuring a huge 5ml tank, a great 0.3ohm coil and impressive airflow, the Zephyrus is something special

The Zephyrus is made the by the vaping company Youde (UD) famous for their range of quality RTAs and RDAs. The Goliath and Goblin RTA have been big hits and it is no wonder they have created a sub ohm tank with a fantastic RBA deck.

The Zephyrus comes with a pre-installed 0.3ohm coil and a fantastic looking RBA deck, as well as different colored o-rings and a spare pyrex glass.

What’s in the Zephyrus kit?

15W: Already pretty ok vapor and a warmish vape. Very impressed at this low wattage. Flavor isn’t quite there though.

30W: Better flavor and warmer vapor. Flavor is pretty good, but still isn’t quite there yet.

40W: The flavor seems to be coming out really nicely now at 40W for me. It a nice warm vape without being too hot on shorter inhales. On longer inhales it is starting to get quite warm! I would vape this tank on this coil around 40W.

50W: Billowing clouds of warm vapor. The tank gets hot quite quickly around 50W even with the heat sink, but the coil seems to wick quite well. It is slightly too warm for me at this wattage. The flavor is good to great, but not quite up there with the coils on the Herakles, Crown and Freemax Starre in my opinion.

So it comes as no surprise that Youde have created a really impressive RBA deck for the Zephyrus. The Zephyrus RBA is a 4 post deck, which makes doing builds a lot easier and has plenty of air flow (more so than the Goblin RTA). The RBA deck is by far and away the best RBA deck out there for any sub ohm tank with the option of replaceable coils. The deck isn’t the biggest when you compare it to RDAs, but it does a really good job. Some vapers have even managed Clapton, Nano Quad and Macro builds. I personally found the deck a little fiddly and found trying to get the wicking right slightly tricky, but I am not very experienced when it comes to more complicated builds. Once you do master a good build on this RBA deck, you get tonnes of flavor with lovely plumes of vapor!

The flavor for me on the RBA deck was far superior to that of the pre-installed coil.

What we liked about the Zephyrus Sub Ohm Tank

The Zephyrus comes with a 5ml juice capacity. We used our medical syringe and managed to get the full 5ml into the tank. This is a good amount as you will be getting through e-liquid very quickly!

I think the 4 post RBA deck is the Zephyrus’ key selling point and this tank will appeal to a lot of drippers who are looking for a sub ohm tank that has both a RBA and replaceable coils. The RBA section is by far the best on any sub ohm clearomizer so far, that also features replaceable coil heads. It isn’t the easiest RBA section to use and I would not recommend it for beginners!

The 0.3ohm coil head we tried was a dual horizontal coil. It vaped surprisingly well at around 20W, which means if you want to save battery life that you can go down to lower wattage and have an enjoyable vape. Having said that, we enjoyed the flavor most around the 30-40W mark. We didn’t get to try the 0.2ohm coil and I assume this will work even better at lower wattages.

I think the Zephyrus tank itself looks really stunning. It is my favourite looking sub ohm tank so far. It also comes with different colored o-rings (red & blue) if you should want to change the color.

The airflow on the Zephyrus, is very wide and features two wide air flow holes which can be fully adjusted and closed. The airflow, despite being quite wide, is slightly more restrictive than something like the Atlantis 2. It is comparable to the air flow on the Arctic.

The Zephyrus has a selection of 3 coil heads: 0.2, 0.3 and 0.5ohm. We only got to try the 0.3ohm head, but it worked well and was impressive at lower wattages. I’d be very interested to see how the 0.5 and 0.2ohm coils fare. If you have tried them, do let us know your thoughts below.

The clouds on the pre-made coil heads were fantastic. Even at 20W the 0.3ohm coil was spewing out nice billowing clouds of vapor. The flavor on the 0.3ohm head was, for me, best around 40-50W. It was a nice flavor and probably comparable to the Atlantis 2. I don’t however; think it was quite as good as the Crown, Freemax Starre and Herakles.

The flavor for me was a lot better on the RBA deck and if I were to use this tank going forward that is how I would use it.

I mention this feature last, as I like the concept of it. However, when using the top-filling function I found the tank leaked uncontrollably from the bottom after re-filling the tank. It is a good idea, but I don’t think the execution was quite right.

The Zephyrus sub ohm tank comes fully apart. You can even take off the airflow ring and get in and clean all parts of the tank, which is good.

The drip tip can be used in two ways. First with the standard drip tip or secondly, you can use the drip tip together with the provided heat sink. The heat sink keeps the drip tip cooler at higher wattages and I preferred to vape with it attached. I found the single drip tip on its own slightly too low for my liking.

What we didn’t like about the Zephyrus sub ohm tank

This was the major down side to this tank and was something that really annoyed us. The leaking always seemed to happen through the bottom. It was worst after using the top filling function, so I just stopped using the top fill and that seemed to help. The leaking was almost a deal breaker for me, as I constantly had to have the kitchen towels out, just in case the tank started leaking again. Other vapers seem to have the same issue as well. One vaper mentioned closing the airflow holes completely when using the top fill function, but that didn’t seem to stem the flow!

This is the only thing that we didn’t like about this tank and unfortunately it was almost a deal breaker.

This tank has so many things going for it and the RBA deck is absolutely fantastic. The standard coil heads are also quite good and provided good flavor and great clouds even at lower wattages. There were a good amount of accessories included in the kit, including the different colored o-rings, the spare pyrex glass and the heatsink for the drip tip. These were nice little inclusions in a fantastic kit.

I wouldn’t recommend this tank for those purchasing their first sub ohm tank, as I think this tank is much more geared towards those who like to make their own coils, but want the convenience of having replaceable coil heads, should they want to use them.

Drippers and users of RDAs will therefore love this tank, as it provides you with a good little build deck with plenty of airflow and juice holes, as well as the option of putting in a regular coil head.

The one big downside we had with the Zephyrus was the leaking, but it didn’t happen all the time. It had the tendency to happen when we least wanted it to happen! Do bear this in mind when deciding to purchase this sub ohm tank and hopefully yours won’t do the same.

We hope you enjoyed our Zephyrus sub ohm tank review and if you have any questions drop us a comment below.